A crucial event in Earth’s history, which likely gave rise to the atmosphere and oceans and eventually allowed life to flourish, was the arrival of volatile elements on Earth. However, geoscientists argue about how and when volatiles were delivered to Earth, and this part of Earth’s history remains unclear. Most recent models favor heterogeneous accretion, such that the composition of the building blocks of Earth and the other terrestrial planets changed from exhibiting reduced, volatile-poor conditions in their early stages to more oxidized, volatile-rich conditions towards the end of accretion, while Earth’s core formation was still ongoing. Results of our ongoing project show that concentrations of siderophile and moderately volatile elements (e.g. Ag, Au, Ge, Ga, Sb) in the bulk silicate Earth (BSE) can be successfully reproduced by heterogeneous accretion models including the addition of a volatile-rich late veneer. Another group of siderophile volatile elements (SVEs) with lower 50 % condensation temperatures (higher degree of volatility; S, Se, Te, Cd, As, Sn, Pb), however, shows a different depletion pattern in the BSE that is still not well understood. Striking features are the extraordinary low contents of S, Se and Te relative to other chalcophile elements of similar volatility, i.e. Cd, As, Sn, Bi, In and Pb. Our new partitioning data and our modeling show that neither metal–silicate melt partitioning, representing the main stage of core formation, nor the segregation of a late sulfide melt can explain the selective depletion of S, Se and Te satisfactorily. Apparently, we are still missing an important process to explain the observed mantle concentrations of siderophile volatile elements.

We thus propose to build on our results to unravel the questions of when and how volatile element signatures were established on Earth and on Mars. We aim to test the hypothesis that the depletion patterns of SVEs are critically influenced by the redistribution of elements between core-forming melts and mantle phases. The main objective is to constrain the SVE partitioning between major deep mantle minerals (garnet, pyroxene, olivine polymorphs, bridgmanite, Ca-Si perovskite, ferropericlase) and metal/sulfide/silicate melts. Furthermore, we aim to investigate the role of reduced accessory mantle phases (metals, carbides, sulfides, nitrides) in fractionating SVEs. Such phases were predicted by high-pressure studies and thermodynamic models and have arguably been an integral component of the deep Earth mineralogy since the time of core formation. In support of this hypothesis, reduced accessory phases were recently identified as inclusions in natural deep diamonds. Similar phase associations and the respective element partitioning are certainly also relevant for core formation on Mars (more oxidized and sulfur-rich conditions) and Mercury (ultra-reducing conditions).

Performing high P-T experiments in these systems would additionally provide further insights into the behavior of the key volatiles C, S and N during core formation. In studying phase relations and melting relations in Fe-C-S-N compositions at pressures and temperatures relevant for core formation, we aim to test experimentally if N sequestration to the core and N capturing in accessory phases in the deep mantle are plausible scenarios to explain Earth’s high and non-chondritic C/N of ~40. The new data, together with our self-consistent and parametrized partitioning dataset for 24 volatile elements (current subproject C1), will enable us to implement these elements in more complex models for core formation on terrestrial planets. This project will provide constraints on the volatile accretion history and the redox evolution of Earth, Mars, and, potentially, Mercury, making subproject C1 vital for geodynamic modeling (subprojects C4, C5, C6) and to interpret volatile signatures derived from natural rocks and meteorites (subprojects B1, B6). We aim to incorporate into our modelling constraints on the degree of equilibration between an impactor and a target (subproject C2) and on volatile loss during evaporation (subprojects B1, B7). 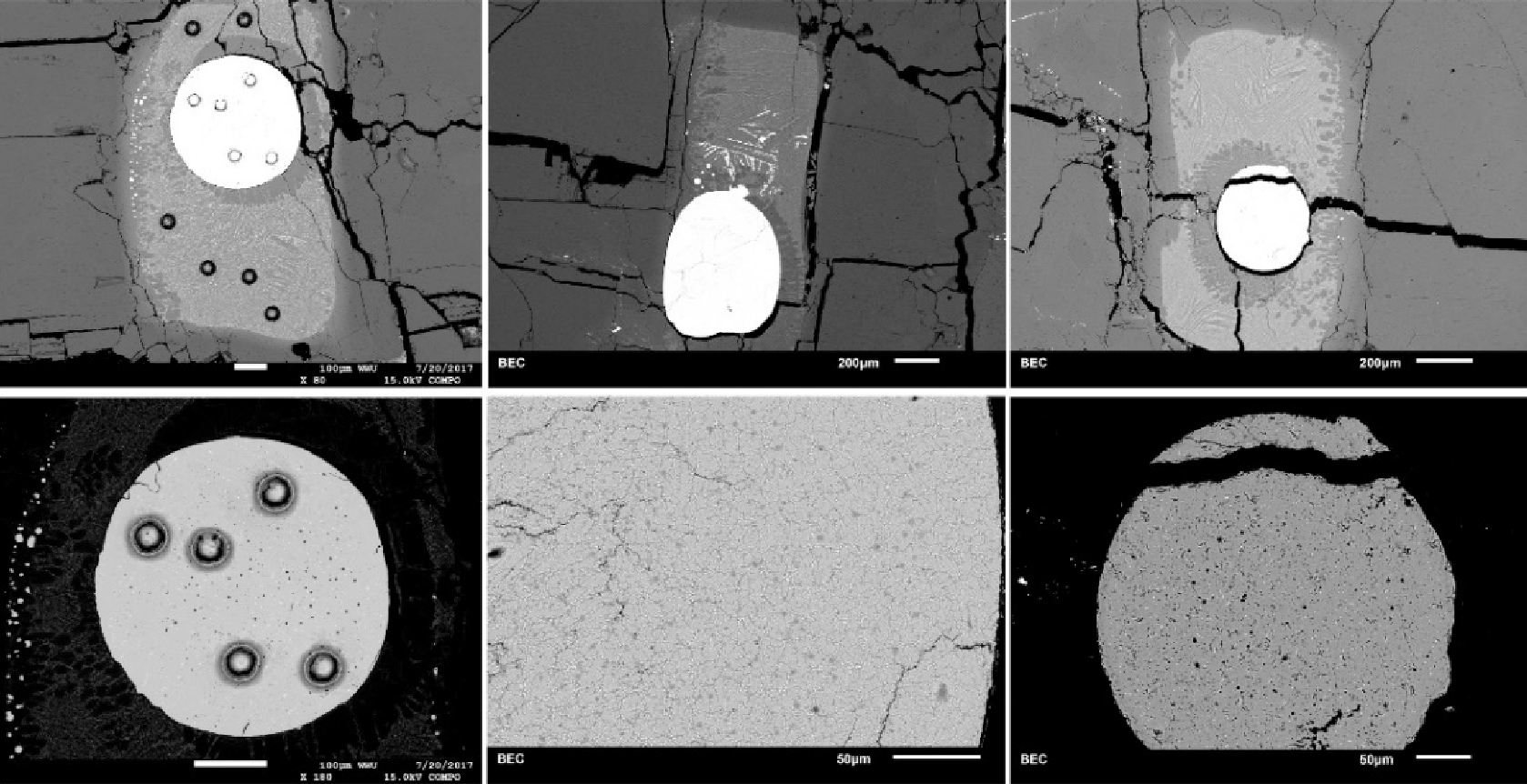 Figure: BSE images of run products. Textures are similar in sulfur-free and sulfur-bearing runs. Charges consist mostly of a metal sphere, with quench textures indicating that the metal was molten, as well as of large pools of quenched silicate melt. Round craters in the left panels are laser ablation spots of 50 μm diameter.