The Earth and other terrestrial planets are variably depleted in moderately volatile elements compared to bulk solar and chondritic compositions, but the origin of these depletions is unknown. They have traditionally been viewed to result from processes within the solar nebula and reflect the late addition of volatile-rich chondritic material to a reduced and volatile-poor proto-Earth. However, an alternative hypothesis has recently gained support as well: that the volatile element depletion results from melting and vaporization on Earth's precursor bodies and not from nebular processes. To distinguish between the different modes of volatile depletion, we propose three strongly interlinked projects that will investigate volatile element fractionation processes on the Moon (subproject B1), during magma degassing on differentiated protoplanets (subproject B7), and by evaporation/condensation in the solar nebula (subproject B8). In this project (subproject B7), we propose to investigate the coupled behavior of mass-dependent isotope variations and elemental loss in controlled degassing experiments and selected natural samples. Vaporization is expected to result in mass-dependent isotopic fractionation, the magnitude of which will depend on the effective volatility of an element and on the conditions during evaporation. However, how these factors control isotopic fractionations during evaporation from melts is largely unknown. To this end, we will examine the processes that lead to volatile element loss and isotopic fractionation during degassing of silicate and metal melts as a function of temperature, time, bulk composition, and fO2. The experimental results will be compared to the isotopic variations observed for planetary materials, using both existing data and new data that will be generated as part of this project. The focus will be on elements of variable volatility and on redox-sensitive elements, including both lithophile and siderophile ele- ments. The experiments from this project will also help in interpreting results obtained in subproject B1 aimed at understanding volatile fractionation processes on the Moon. In addition, we will also study mineral-vapour partitioning and associated isotopic fractionation to help interpret volatile fractionation signatures observed in nebular materials (subproject B8). Combined, these data will provide first-order constraints on volatilization processes in the early solar system. Such information is a prerequisite for addressing the contributions from large-scale degassing of planetesimals versus nebular evaporation/condensation processes as the main driver for setting the volatile budget of planetary building blocks. As such, these results will help to distinguish models in which Earth's volatile depletion results from melting and vaporization from those in which the volatile depletion reflects the late-stage addition of chondritic material to a volatile-free proto-Earth. 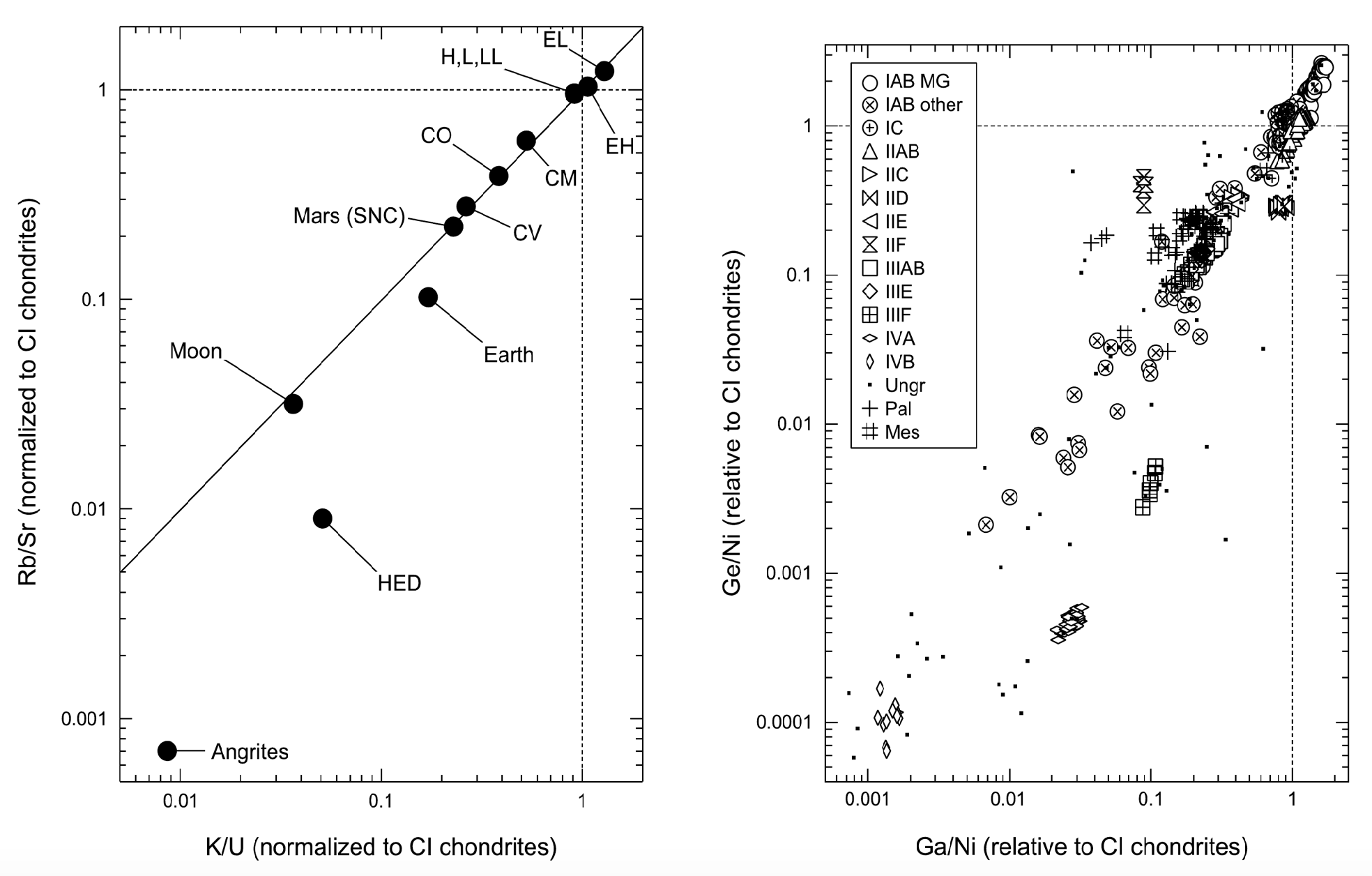 Figure: (Left) CI-normalized Rb/Sr vs. K/U of chondrites and differentiated planetary bodies; (Right) CI-normalized Ge/Ni vs. Ga/Ni in various iron meteorite groups. These plots of volatile over non-volatile element ratios reveal the volatile-depleted nature of planets and the parent bodies of differentiated meteorites relative to chondrite meteorites. Figure from Davis (2006).