Understanding the late growth history of the terrestrial planets requires information on the genetic heritage and type of the late-stage building materials of the Earth and Moon. As part of this project, we aim to obtain this information using nucleosynthetic isotope anomalies in the siderophile elements Mo and Ru. The recent discovery of a fundamental Mo isotopic dichotomy between non-carbonaceous (NC) and carbonaceous (CC) meteorites, which likely derive from inside and outside Jupiter’s orbit, respectively, has established that Mo is diagnostic of an object’s origin in either reservoir. This has allowed broad conclusions to be drawn about the nature of late-accreted material to the Earth; for example, that Earth’s accreting material was isotopically most similar to the NC enstatite chondrites and winonaites/IAB iron meteorites. However, results obtained during the first funding period also reveal that the Mo isotopic composition of Earth's mantle is intermediate between those of the NC and CC reservoirs, indicating that the Earth also accreted CC material during the later stages of its growth. From the Mo isotope data alone, it is not possible to quantify how much CC material was added during the main accretion stage, and how much derives from the late veneer. Addressing this issue is important for constraining the origin and nature of late-accreted materials (i.e., inner vs. outer solar system origin and whether it was volatile-rich). This information, in turn, has important implications for understanding the dynamics involved in the late stages of terrestrial planet formation. Because Ru was added to the Earth’s mantle in the late veneer, it can provide insight into the relative timing of the delivery of CC material. Our Ru isotopic work has shown that the Earth's mantle is similar to NC meteorites, suggesting that the late veneer solely derives from the inner solar system. However, this conclusion is valid only if known meteorites are representative of the entire compositional range of bodies in the NC and CC reservoirs, which is not known. Further, this conclusion was based on only 100Ru data, not relative abundances of several isotopes, as was essential for the utility of Mo. To resolve this issue, we propose to use Ru isotopes in a similar manner to Mo, and establish a Ru isotopic dichotomy between NC and CC bodies. Identifying a NC-CC dichotomy for Ru requires high-precision measurements for 96Ru, which are currently not available. Thus, a major objective of this project will be to obtain high-precision 96Ru data and to determine the distinct Ru isotopic characteristics of NC and CC meteorites. With this information, it will be possible to evaluate whether the late veneer contained CC material, or if this material was entirely added prior to late accretion.

As part of this project we also plan to continue some of the work from the first funding period, including additional Ru-Mo isotope measurements on lunar and HED impactites. These data will provide important new insights into the genetic heritage of impactor populations present between ~3.5 and ~4.5 Ga and, thus, will be used to evaluate how impactors evolved since the time of late accretion to the Earth. These data will also be used to test the hypothesis of a late heavy bombardment in the inner solar system (project area A). 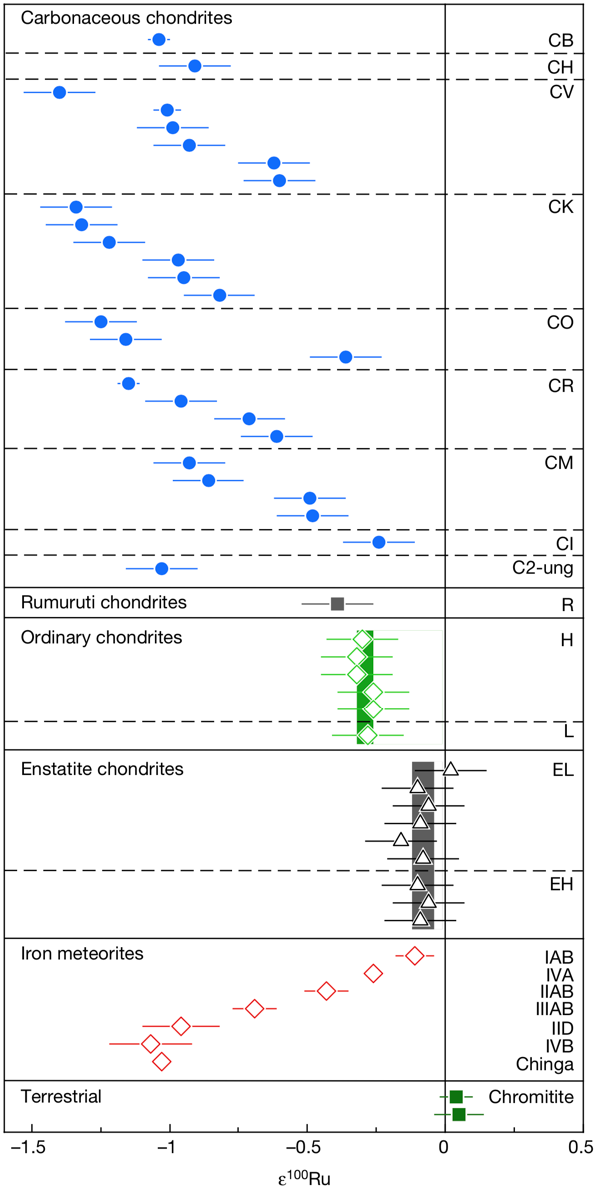 Figure: ε100Ru data for meteorites. Note that all meteorites have negative ε100Ru and that carbonaceous chondrites have the largest anomalies. From Fischer-Gödde and Kleine (2017).