There is general consensus that the giant impact that led to the formation of the Moon resulted in large-scale melting and the formation of a global lunar magma ocean (LMO). However, major uncertainties exist regarding the timing of the impact (i.e., the age of the Moon) and the duration of LMO crystallization and crust formation. For instance, the age of ferroan anorthosites (FANs) is often taken as the age of the Moon, because the time between the cooling of the LMO and the formation of FANs should have been very short. Intriguingly, the ~4.35 Ga age of the only precisely dated FAN (sample 60025) coincides with the model age for LMO solidification derived from the isotopic composition of KREEP (i.e., the residual liquid of the LMO), suggesting rapid LMO crystallization soon after formation of the Moon. However, thermal modelling results obtained during the first funding period (subproject C4) indicate that LMO solidification took ~100–200 Ma, and that lunar crust formation occurred over ~100 Ma before final crystallization of the LMO. To resolve the apparent conflict between the chronology of lunar samples and thermal modelling of lunar differentiation, we propose a multidisciplinary approach aimed at better constraining the duration and processes involved in lunar differentiation and crust formation. First, we will use the initial 87Sr/86Sr of FANs to determine the duration of lunar crust formation and test the prediction by current thermal models that crust formation occurred over ~100 Ma. Second, we will develop realistic thermochemical models of the LMO that include flotation and remelting of plagioclase, impacts, and secondary volcanism, with the ultimate goal of understanding the influence of a long-lived LMO on the chronology of lunar crust formation. Third, we will determine the Hf isotopic composition and Pb-Pb ages of lunar zircons, which provide a ~400 Ma record of KREEP evolution, and we will use these data to assess the longevity of the LMO. Finally, we will experimentally determine high-precision mineral–melt partition coefficients for Rb, Sr, Sm, Nd, Lu, and Hf appropriate for lunar conditions, with the ultimate aim of using recently developed petrological and thermal models of the LMO (subproject C4) to better constrain the ages of major lunar geochemical reservoirs. Combined, our multifaceted approach will provide new and solid constraints on the timescales of the Moon's formation and differentiation, and on the connection between lunar formation, the onset of late accretion and the chronology of the lunar cratering record (subprojects A1, A2, A4). 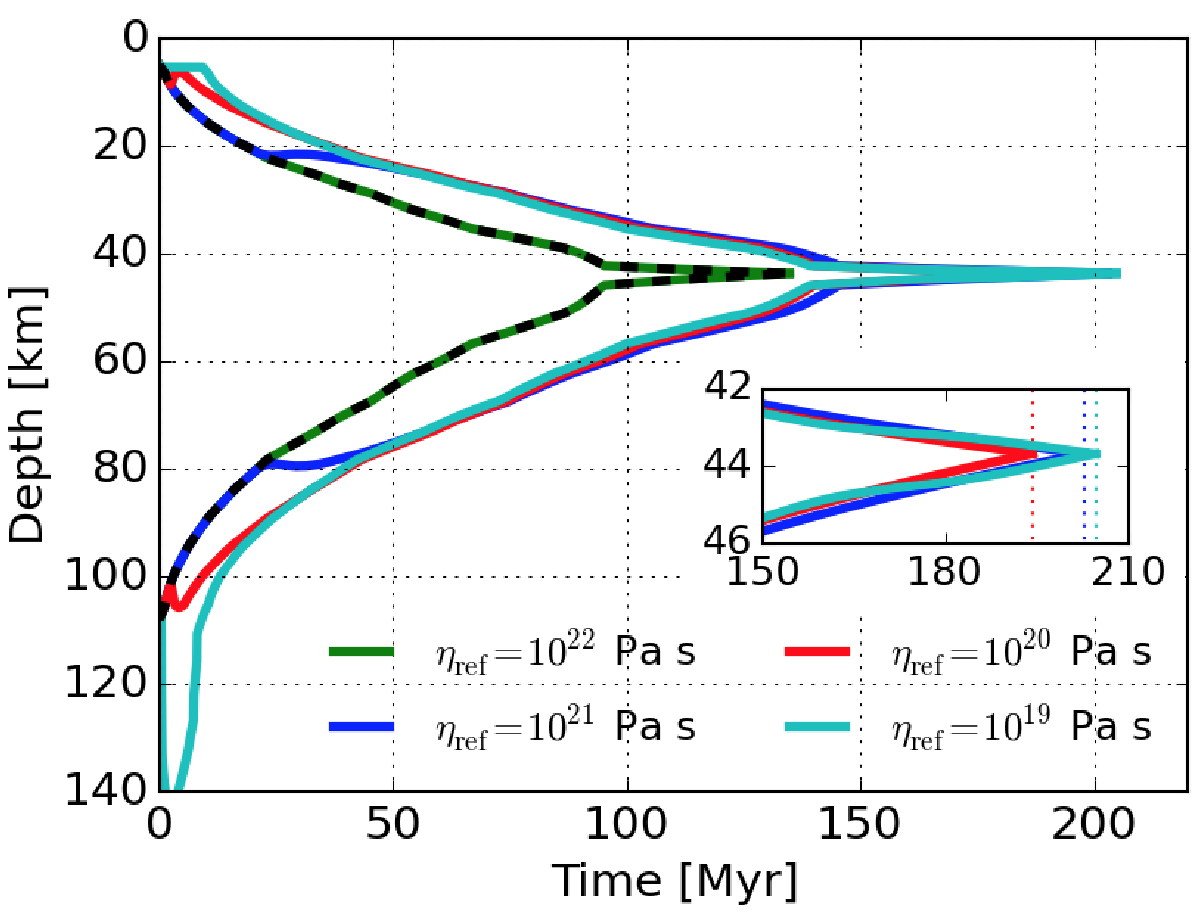 Figure: Evolution of the bottom radii of the magma ocean (lower curves) and of the crust (upper curves) for crustal thermal conductivity k_crust = 2 W/m2 but for different values of the reference viscosity η_ref, taking into account thermal convection in the cumulates. The black dashed line corresponds to assuming purely conductive heat transfer through both the crust and the cumulates underlying the magma ocean. In the inset, the vertical dotted lines indicate the time of the end of crystallization for the corresponding cases.