Lunar impact basins and deposits preserve details on the timing, flux, and composition of late accretion in the inner solar system. However, interpretations of this record regarding pre-3.8 Ga accretion rates, especially the occurrence of a terminal lunar cataclysm at ~3.9 Ga, remain controversial. Thus, our continuing primary objective is to obtain a body of robust lunar impactite ages for testing models of the 4.5–3.8 Ga segment of the lunar accretion history. During the first phase, a multi-chronometric approach (Lu-Hf, Sm-Nd, Rb-Sr, ± Pb-Pb mineral isochrons, plus in situ U-Pb zircon, baddeleyite, and phosphate dating by ion microprobe, and comparison to existing Ar-Ar dates) was developed and applied to selected Apollo samples. Paired with detailed petrographic study, this method allowed us to date specific events such as igneous crystallization from a lunar magma or impact melt sheet, (re-)crystallization induced by a large impact, and partial resetting by later impact(s). Multiple events are sometimes resolved within a single sample. Mineral isochrons (~4.2 Ga; A16, A17) and U-Pb dating of zircon and baddeleyite (re-)crystallized by impact-induced processes (A15, A16: ≥4.2 Ga) indicate that many Ar-Ar dates making up the ~3.9 Ga impactite age peak represent resetting by the Imbrium impact. Along with crater size-frequency distributions (CSFD) from the lunar surface (subproject A3), these data argue against a lunar cataclysm caused by a distinct population of objects impinging on the inner solar system at ~3.9 Ga.

Though results from the first funding period and recently published data have demonstrated a strong influence from large, pre-4.0 Ga impacts, links between ages and basins remain tenuous and require further investigation. The occurrence of 4.2 Ga ages in both KREEP-rich impact melt rocks (IMR) and KREEP-poor rocks suggests that both the Procellarum KREEP Terrane (PKT) and the feldspathic highland terrane were affected by large impacts at that time. Serenitatis and Nectaris, with CSFD model ages of ~4.2 Ga, are plausible highland source basins, but the Serenitatis model age is debated because most A17 impactites tend to be considerably younger. However, modelling impact melt distribution by lunar gardening processes (subproject A4) suggests that, in addition to Imbrium melt, A17 should also host impact melt rocks from Serenitatis, Crisium, and South Pole Aitken, which have CSFD model ages of ~4.2, ~4.1, and ≥4.3 Ga, respectively. Therefore, in the second project period, we will apply our multi-chronometer approach to additional A17 samples to better constrain the ages of these basins. Some of these rocks were formed, and in some cases metamorphosed, before the Imbrium impact and are likely related to basin-forming impacts outside the PKT. The resulting impact dates will first be compared to the relative basin-formation sequence as well as basin model ages. Then—by taking into account compositional information including highly siderophile elements (HSE, subproject B1) and modelled ejecta contributions to Apollo landing sites (subproject A4)—we aim to link the dated samples to basins or at least exclude specific basins as their source(s). This may provide additional reference ages for another continuing objective, namely reconciling sets of isotopic dates with the model ages of basins derived from crater counting. 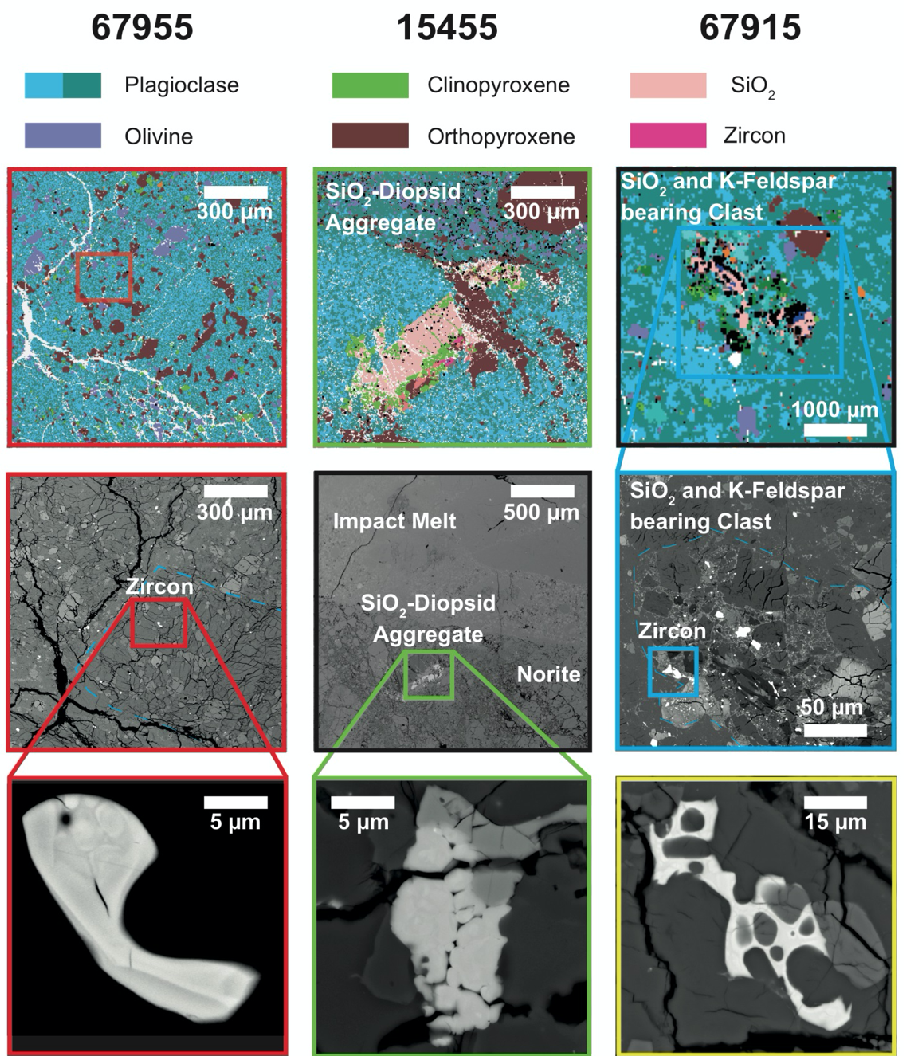