In the Earth–Moon system, the origins of atmophile and hydrophile elements, such as H, C, and the halogens, and the processes that govern their abundance remain poorly understood. These elements either accreted and partially degassed during the main stages of Earth’s construction, or they accreted at least partially late after the core was formed. Furthermore, to understand the overall volatile element budget of the Earth and Moon, we must know about the abundances of the atmophile and hydrophile elements in the crust and mantle, as well as the constraints on their behaviour during the giant impact, magma ocean crystallisation, and magmatic differentiation. Compared to CI chondrites, all terrestrial planets are depleted in water and other volatiles, reflecting the variable loss of volatile elements during solar system condensation and possibly during planet formation and differentiation. Lunar volcanic rocks are even more depleted in volatiles, which supports the prevailing giant impact model. Even though atmophile elements occur only in trace amounts in the terrestrial planets, they are instrumental for establishing and maintaining plate tectonics, and they greatly influence Earth’s internal dynamics and global biogeochemical cycles. For example, high abundances of certain hydrophile elements (e.g., H, Cl, and F) lowers the liquidus of mantle rocks, which results in lower viscosity and enhanced transport of heat and matter within the planetary interior. At shallower depths, these elements facilitate tectonic responses to plate motion, magma generation, and element mobilisation during a wide range of high and low temperature processes. Therefore, the atmophile and hydrophile element budget of the Earth–Moon system is key for understanding its formation and subsequent geodynamic evolution (subproject C4 and C5).

Earth’s atmophile and hydrophile element budget also provides clues about the time of planetary volatile accretion and offers constraints on the subsequent redistribution of volatile elements during planetary differentiation. The Moon likely formed at the end of Earth’s main accretion phase, and it remains debated whether both bodies were initially dry or wet, or if it accreted dry and received its volatiles exclusively from late-impacting asteroids or comets (see also other B subprojects). Therefore, volatiles on the Earth and Moon may have, at least in part, a different origin. Moreover, a resolvable signal of late volatile element delivery as proposed for the Earth may also be discernible from the lunar record. Hence, the proposed project will investigate the atmophile and hydrophile element inventory of Earth and Moon from three different angles, employing geochemical–petrological studies on terrestrial (Part 1) and lunar (Part 2) samples as well as experimental partitioning studies (Part 3) that will provide key constraints for quantitatively interpreting the volatile inventory. We specifically aim to (1) better constrain the terrestrial volatile element content by determining the H, halogen and the H, Cl, and S isotope composition of olivine-hosted melt inclusions in a greater variety of mantle-derived rocks than investigated to date. Furthermore, we aim to (2) determine volatile element contents (H and halogens) and the isotope ratios of H, Cl, and S in phosphates from a range of lunar rocks. To complement interpretation of the analytical results, partitioning experiments will (3) quantify the behaviour of atmo- and hydrophile elements during the early evolution of Earth and Moon. In combination with the experimental data, the new atmophile and hydrophile element data on lunar and terrestrial samples will enable us to better constrain the origin, present budget, and behaviour of the volatile elements during formation and differentiation of the Earth and Moon. In combination with information provided from projects B1 and B2 on the relative contribution of late-accreted material (and its volatile content), the new data will ultimately allow us to determine whether Earth and Moon accreted wet or dry and how much of the Earth’s and Moon’s volatile element budget was acquired during the late accretion stage.

One intriguing aspect of our solar system’s history is how and when Earth and the other terrestrial planets received their volatile components. Currently, we know that the solar system’s planetary bodies were likely made up of materials that are similar to components present in approximately 30 silicate-rich undifferentiated and differentiated meteorite groups. Some of these potential building blocks¾including comets, Kuiper belt objects (KBOs), and water-bearing asteroids (the latter perhaps similar to the parent bodies of carbonaceous chondrites)¾contain volatiles and thus could have contributed the terrestrial planets’ atmo- and hydrophile volatile components. However, the total inventory of volatile components on Earth (and potentially on other terrestrial planets) cannot be explained by the addition of these materials.

Thus, another source must have contributed to Earth’s volatile content. One potential source might be a material found in meteoritic breccias. Within meteoritic breccias, volatile-rich extraterrestrial materials exist as lithic fragments, but these materials have not been identified as an individual type of meteorite. Instead, these volatile-rich fragments are often described in the literature as “dark clasts”. They vary in size from microscopic to macroscopic, and they are ubiquitous in chondritic (e.g., ordinary and Rumuruti, CM, CR, CH chondrites) and achondritic meteorite breccias (e.g., ureilites, aubrites, HED-meteorites).

Also, these dark clasts are mineralogical and chemically different from typical CI and CM chondrites, so they may yield insights into the types and compositions of volatile-rich materials that exist beyond those found in samples from known meteorite classes. Thus, because these dark clasts are found in all types of meteoritic breccias¾in chondritic breccias as well as in breccias from differentiated parent bodies¾they may represent some of the material that was scattered into the solar system and is perhaps related to giant planet migration (“Grand Tack”). This scattered material may have “contaminated” not only meteorite parent bodies, but also large planetary bodies like Earth.

Hence, the most important aim of the project is to determine if the composition of these dark clasts matches the volatile inventory of the Earth and potentially other terrestrial planets. Another important goal is to roughly decipher when these clasts and the corresponding breccias formed on their parent body, because this might provide insight into when they could have delivered volatiles to Earth. To meet these goals, the project will be subdivided into two parts: In the first part, we will examine the internal structure and the compositional variability of these dark clast materials, which will provide chemical details about the fragments’ constituents (we will analyse the stable isotopes of O, C, D/H, Cl and determine the halogen concentrations), and reveal how they might define their hosts’ bulk signals. The second part of the project will determine the bulk chemical characteristics of the clasts that may have contributed to the current volatile inventories of terrestrial planets (we will analyse major, minor, and trace elements and perform isotope analyses of N, D/H, O, and Cr). Overall, this subproject will complement the subproject B4, which will determine the atmo- and hydrophile inventory of the Earth and Moon, as well as subprojects B1-B3, which will determine the chemical compositions of late-accreted material. From this suite of highly coordinated subprojects, we may then be able to specifically quantify the amount of highly volatile elements that were added during late accretion. Thereby, understanding the general provenance of these volatile components¾as we aim to do here¾will shed light onto key historical processes that shaped Earth and the terrestrial planets. 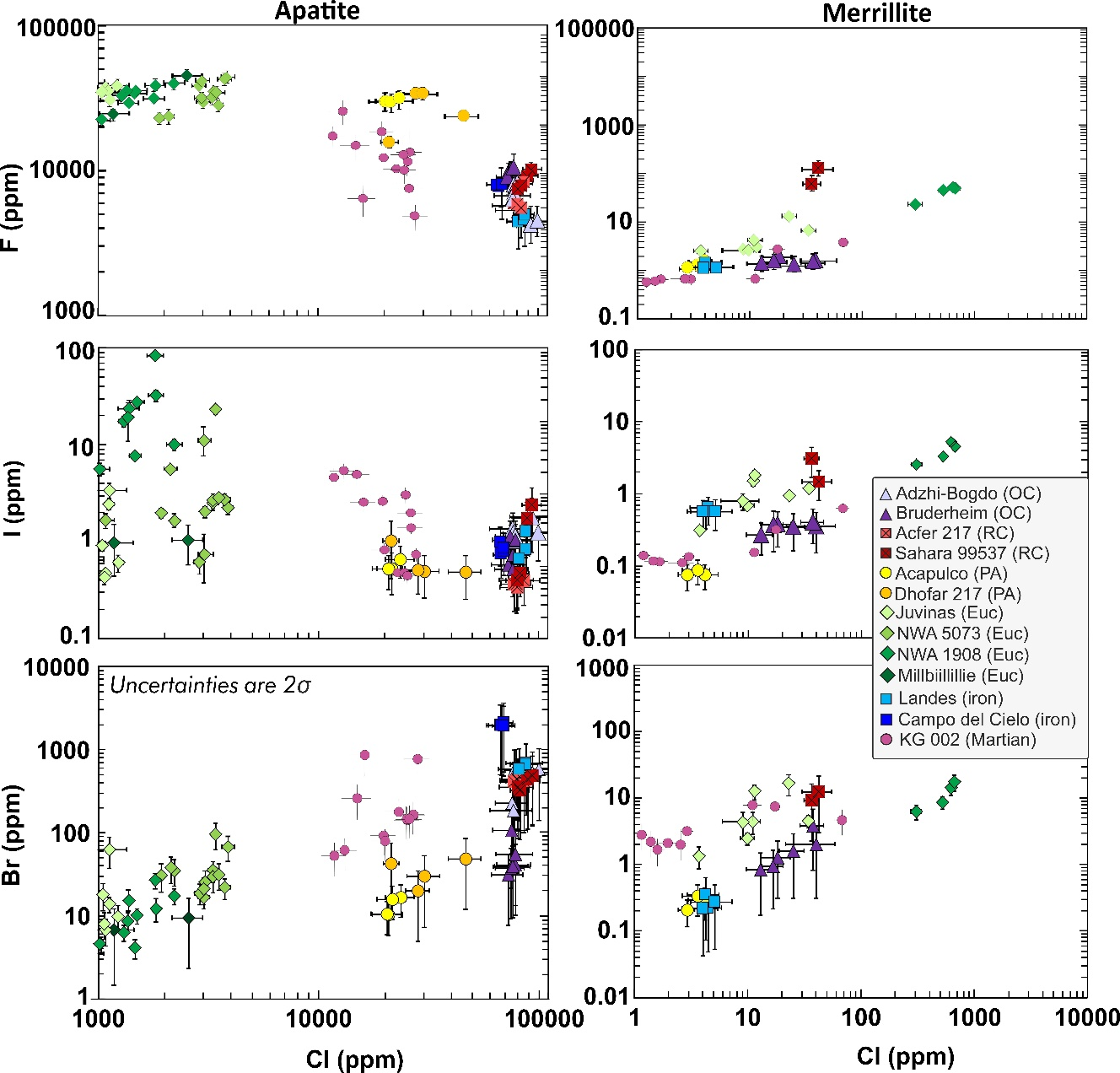