The lunar crater production function (PF) is the component of the surface chronology model which describes the size-frequency distribution of impact craters as they form. It differs from the distribution of craters observed on the lunar surface today because of obliteration effects, which act differently at different scales. Its form is significant not only for the Moon but also for other terrestrial planets, as it constitutes the basis for their chronology systems as well. Further, while in principle the PF could be an evolving function, the A3 subproject from the first funding period, which examined the issue of a possible change in impact frequency between the Pre-Nectarian and Nectarian epochs, found that, with more careful data treatment, the evidence for this is not apparent (see Fig. 1 below).

In the context of this new finding, there has also been a recent resurgence of work to re-examine the calibration of surface crater densities against radioisotope-dated samples (including within the previous A2 subproject). We intend to continue in this direction, re-evaluating the calibration of accumulated crater density with respect to the ages of samples obtained from radioisotope dating, including samples retrieved by the Soviet Luna 16, 20, and 24 spacecraft. These age calibrations only make sense within the context of a specific variant of the PF, so for a new chronology system to be consistent, all the components must be revised equivalently. In this context, reconstituting the lunar PF, whose present form was established in the early 1980s, will benefit from fresh measurements on higher-quality images and topography data, a better understanding of the landing site geology, accurate and complete documentation of the new source measurements, and the use of more developed measurement techniques, particularly with respect verifying spatial randomness and correcting for non-sparse portions of the distribution. Likewise, we expect the new data to improve our understanding of the geological context of the Luna landing sites, allowing us to make better connections between the returned samples and their source regions.

Currently, the production function of Neukum is valid only between 10 m and 100 km or 300 km, depending on the version of the PF. In the context of deriving a new production function, we would like to extend the validity of the production function to smaller crater diameters. This is particularly important when trying to date small-scale areas. In principle, modern high-resolution data allow for dating small-scale features, although CSFD measurements might be affected by self-secondaries, target properties, crater degradation, layering, and heterogeneous impact densities. We propose to systematically study these parameters and their effects on our ability to date planetary surfaces.

In the past, various authors used different lunar production functions and chronologies to derive absolute model ages. It is important to realize that this means the CSFD ages published in the literature cannot be compared directly with each other. Thus, it is important to generate a self-consistent dataset by re-fitting the existing CSFD data with a single production/chronology function. We are proposing to re-fit all absolute model ages of lunar mare basalts, light plains, and other structures to make the model ages comparable. This will allow researchers to have access to self-consistent age information for large parts of the lunar surface. 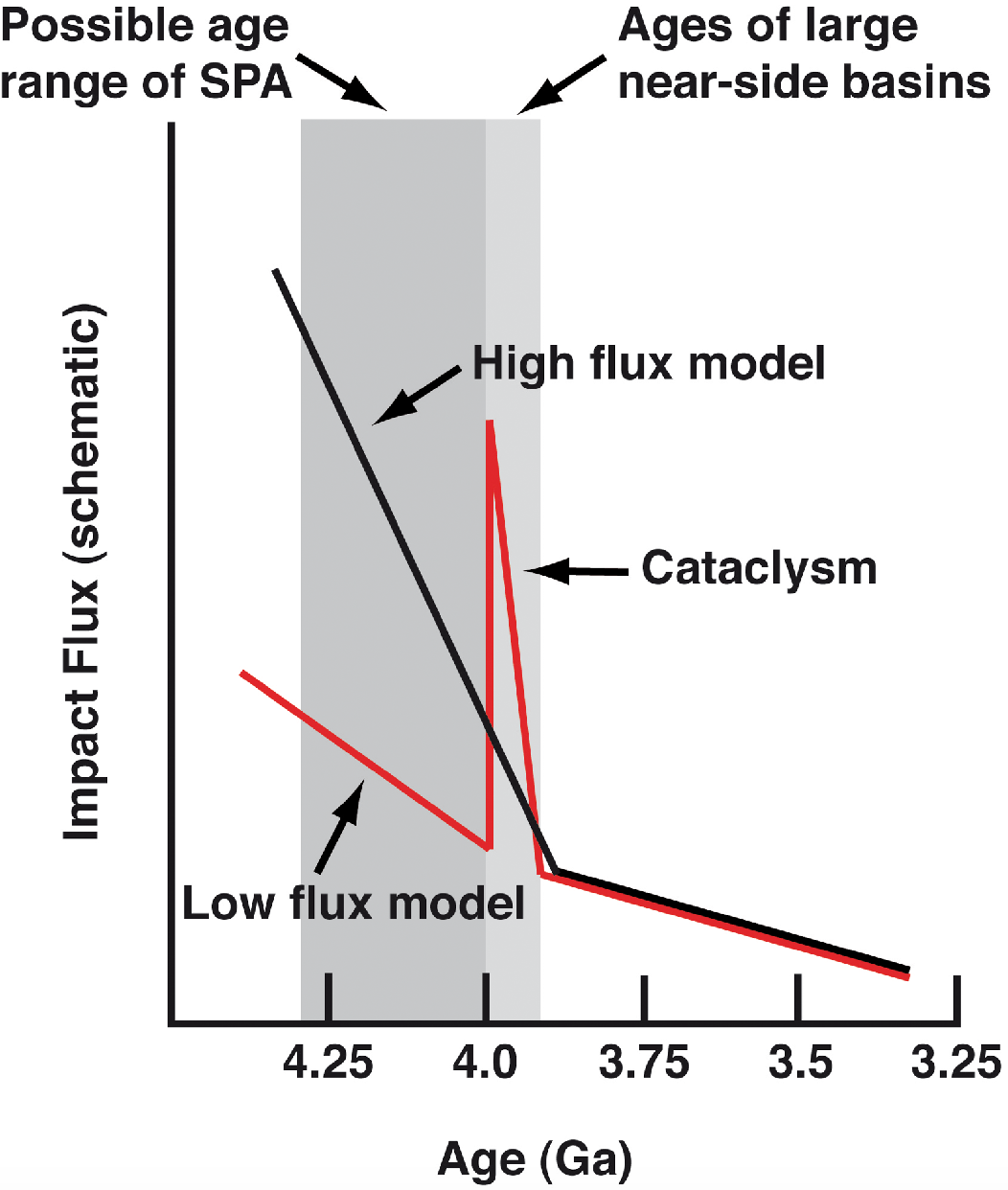 Figure: A conceptual diagram of two models of the lunar impact flux. An age of the South Pole-Aitken basin of <4 Ga would favour a cataclysm because, in this case, the time frame of lunar basin formation is rather condensed. An age of >4 Ga would allow more time for basin formation, and as such would relax the constraint.